The purple gowns began to flow into Butler Community College’s gymnasium to the traditional Pomp and Circumstance and the tears of joy seemed to flow instantly from family members who supported them. Sixty-five Nursing graduates filed onto the floor to take their place as Butler’s Fall Nursing Class of 2019.

The ceremony, held Thursday evening at the College’s El Dorado campus, marked the one-year anniversary of Butler and the University of Kansas Nursing celebrating dual graduates of both their programs.
This December, five graduates also received their University of Kansas BSN degree as part of a Butler associate degree in nursing (ADN) and KU Nursing partnership launched in 2016. During the ceremony, Jennifer Beall, Nathan Aung Maran, and Madison Cary of Wichita, Halie Rose Smith of Yates Center, and Melissa Wedel of Andover were presented their KU Nursing cords by Christy Streeter, Dean of Health, Education and Public Services at Butler.

This group marks the third class of KU graduates as part of the nursing-school partnership. Students earn degrees from both institutions when they enter the Butler and KU Nursing programs at the same time and simultaneously complete face-to-face course work at Butler and online instruction through the KU Nursing program. With the aid of faculty members from each college, students receive both their associate degree in nursing and their bachelor’s degree in nursing at the same time.

Trustee Lechtenberg pointed out this class is now part of an alumni base which has graduated from a top 10 nursing program in the state as designated by RegisteredNursing.org. In addition, he noted that 95% of the graduates already have jobs. This class is well on its way to meeting the expected Butler tradition of a 100 percent job placement rate within six months of graduation.

Kelsey Schlageck of Wichita, 2019 Class President, addressed her fellow nurses and expressed her gratitude on behalf of the class to Butler’s faculty for their dedication, commitment and patience as each of them worked to achieve this milestone. 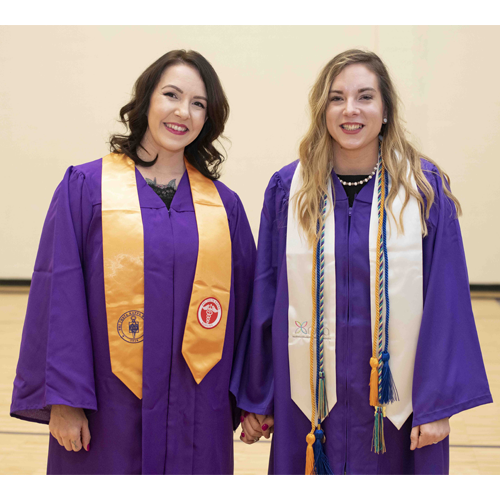 “Thank you doesn’t begin to scratch the surface.”

“I gained an immense amount of knowledge. . . and confidence in my abilities to critically think,” she said. She also shared moments and insight of being a nursing student and a nurse that delighted those with the professional knowledge.
Rachael Henry of Park City, 2019 Nursing Class Vice President, lead the class in reading the International Council of Nurses’ Pledge.

Since 1965, Butler Nurses have received a pin upon graduating with an associate in applied sciences in nursing degree. The practice of pinning nurses began in the late 19th century in London. By 1880, the symbolic rite was brought to Bellevue Hospital in New York City. Since then the practice has become commonplace at nursing school graduations.