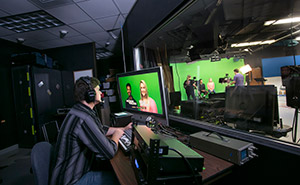 A number of Butler Community College mass communication students were presented an award by the Kansas Association of Broadcasters (KAB) in early April.

The students submitted their work in various radio and television competition categories and were judged on excellence, believability, creativity and effectiveness.
The Annual Student Seminar and Career Fair, the event where the prizes were awarded, also provided students the opportunity to connect with broadcast professionals and share their resumes.

A list of Butler students winning KAB awards + hometowns are below: