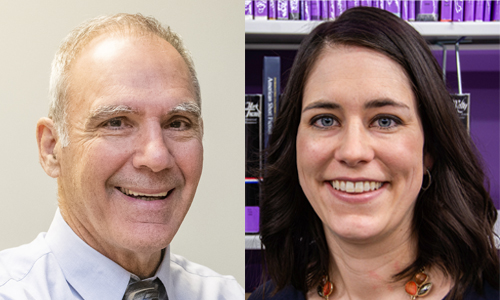 Butler Community College instructors Larry Friesen and Amanda Hadley have been named recipients of the John and Suanne Roueche Excellence Awards for 2021.

From a pool of more than 60 nominees, a committee selected Friesen and Hadley as this year’s award winners. Mark Jarvis, Butler’s Director of Faculty Development, says that approximately 90% of the nominations come from students. Each year a full- and part-time instructor are recognized.

Friesen, a math and engineering instructor, came to Butler in 1981 after teaching for several years at the high school level. In his 40-year career at Butler, Friesen has witnessed significant changes in education.

“When I began, you just got the textbook and a piece of chalk and went to work,” Friesen said.  These days, Friesen incorporates a variety of hands-on activities to demonstrate mathematical concepts. Students in Friesen’s class consistently cite his humor, support and patience as qualities that make him an exemplary educator.

For Friesen, working at Butler is a “dream job.”  He particularly enjoys the wide variety of students he teaches, some from tiny high schools, some from large metropolitan areas, and some from other countries.  “I had one class with students from a dozen countries.”

While Friesen is honored to receive the Excellence Award, he acknowledges the many colleagues “who would be deserving and never get an external award.” He also credits Butler for its consistent and exceptional support of faculty.

Hadley, a Spanish teacher, has taught at Butler for three semesters. She appreciates the variety of students she encounters in her classroom and the satisfaction of knowing her work will help them communicate with and help others across a wide range of career choices.

Playing a key role in the development of Butler’s online foreign language program, Hadley has contributed her knowledge of a variety of tech tools to facilitate her students’ learning. Last semester, she taught entirely online while pregnant with her second child and managing a toddler at home.  “It was crazy and hectic.”  Receiving the Excellence Award at the end of such a challenging semester gave Hadley some much-needed encouragement.

Like Friesen, Hadley appreciates the support Butler provides its instructors.  “It is awesome to work for an institution that recognizes their faculty and staff.”

Friesen and Hadley were celebrated this month with other community college faculty from across the country during the League for Innovations virtual annual conference. Each Roueche Excellence Award recipient also receives a specially cast pewter medallion.

The League for Innovation in the Community College is an international nonprofit organization that was founded in 1968 and has a mission to cultivate innovation in the community college environment.