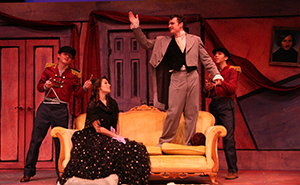 “What makes telling these adventures so exciting for us is that we have a wonderful and diverse group of theatre scholars coming in to tell those adventurous stories,” said Bob Peterson, professor of Theatre and Speech.

Butler offers full tuition and book scholarships to qualifying students who want to participate in either performance or technical theatre. Auditions and interviews are held each spring for the following year. For information about theatre scholarships, students are encouraged to contact Bob Peterson at bpeterson@butlercc.edu.

The Butler Theatre Department will produce four productions during the 2015-2016 school year: “Tom Jones” adapted by Mark Brown from the novel by Henry Felding; “Tarzan®, The Stage Musical,” based on the Disney film adapted from the story “Tarzan of the Apes” by Edgar Rice Burroughs, music and lyrics by Phil Collins, book by David Henry Hwang; an Alvin the Alligator adventure by Bob Peterson; and “The Last Life Boat” by Luke Yankee.