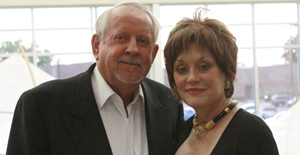 A gift that not only remembers Wichita entrepreneurship magnate Fran Jabara, but also benefits Butler Community College was recently given from the R.D. & Joan Dale Hubbard Foundation of Ruidoso, NM.

R.D. Hubbard, a Butler alumnus, was close friends with the late Jabara who, along with Hubbard, was an inaugural inductee to the Entrepreneurship Hall of Fame at Butler. The event has been re-named the Fran Jabara Entrepreneurship Hall of Fame to honor his legacy. The $20,000 gift matches a donation made by the Lattner Family Foundation, Inc., also in memory of Jabara.

Mr. and Mrs. Hubbard, Kansas natives, have the distinct honor of being the highest philanthropic contributors in Butler’s history, with gifts totaling more than $3.5 million toward numerous beneficial projects such as the Hubbard Award of Excellence (Butler’s largest scholarship and highest award), the Hubbard Champions Training Center, and $1.5 million to the Hubbard Welcome Center in 2007, the largest gift in the school’s history.

“Generous donors like Mr. and Mrs. Hubbard are what make Butler an incredibly special place,” President Kim Krull said. “Those who have the vision to contribute to a campaign of this magnitude understand the legacy they are leaving for our students in the future.”

The Forever Butler Campaign is a $10 million endowment and deferred giving campaign to raise funds for scholarships, program support, and internships. The campaign began in 2014 and was announced publicly in April 2015. At the annual President’s Donor Dinner held in September, Foundation Board President Jeremy Sundgren announced that the campaign is $8.4 million to goal.

“We are, as ever, grateful to Mr. and Mrs. Hubbard for their continued giving to Butler,” Vice President of Advancement Stacy Cofer said. “Because of them and so many others like them, we can continue to ensure student success.”