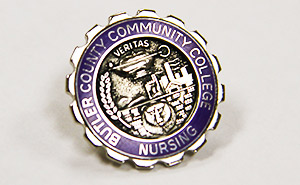 The December 10 event was held at Butler’s campus in El Dorado.

Mitch Taylor, lead nursing professor for third semester, was the evening’s keynote speaker. After sharing medical information that only the nursing graduates knew to laugh at, Taylor offered four bits of advice to the graduating class: “don’t fear mistakes,” “be passionate about your work and work hard,” “be kind to the one who is not to you,” and “have fun.” He offered his final tip as he removed his suit coat and unbuttoned his dress shirt to expose a Superman T-shirt.

“Laugh and enjoy your laugh,” he emphasized. Laughter swelled from the class.

Robert Bailey of Wichita and class president also took the podium. During his address, he commented he was more than twice the age of his fellow classmates. Bailey delivered an energetic speech encouraging his classmates to be resilient, smart, proponents for positive change, and always the patient advocate.