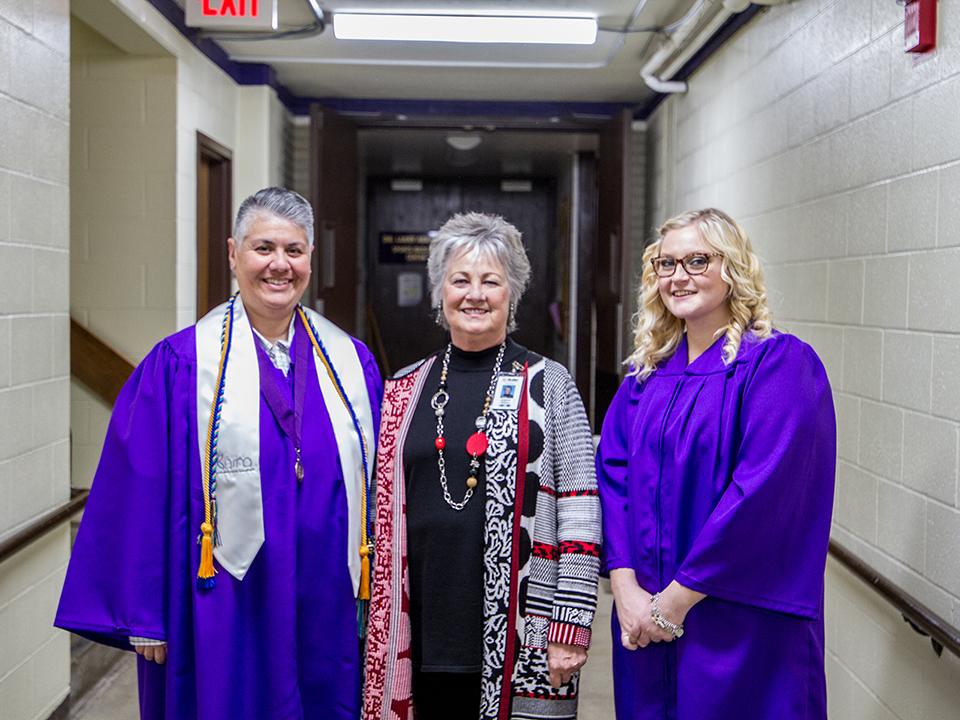 Butler Community College recognized 57 nursing graduates Thursday evening during its December 2018 Pinning Ceremony. The Dec. 13th event was held on Butler’s El Dorado campus. It was a special occasion as Denise Renee Johnson and Ashley Looft, both of Wichita, were recognized as the first two graduates of the new Butler ADN/University of Kansas BSN degree program launched in 2016.

Christy Streeter, Dean of Health, Education and Public Services, presented the two bachelor degree recipients with graduate chords to celebrate their accomplishment. Looft and Johnson had to enter the Butler and KU programs at the same time, simultaneously completing face-to-face instruction at Butler and KU Nursing classes online. They received both their Associate Degree in Nursing and their Bachelor degree in Nursing from Kansas’ two nursing education powerhouses.

Since 1965, hundreds of Butler graduates have received a pin upon graduating with an associate in applied sciences in nursing degree. The pinning practice of nurses began in the late 19th century in London. By 1880, this symbolic rite was brought to Bellevue Hospital in New York City. Since then, the practice has become commonplace at nursing school graduations.

“The Nurses Pinning is a beautiful rite of passage into the industry,” said Dr. Eagleton of the ceremony, her first at Butler after having joined the college in mid-November.

Class President Natasha Rae Nelson of Derby, addressed her fellow classmates, family and faculty. Some wiped tears as Nelson captured various memories of their time together learning various procedures and working hard to excel on exams.

“We come from all backgrounds and cultures and life seasons,” said Nelson. “We are united by the compassion we have for complete strangers.

“The faculty and staff never stopped believing in us and this evening is also a celebration of their support and patience,” Nelson added. She concluded, “Let your light shine, go save lives and leave a huge impact on this world.”