Butler Celebrates the Pinning of More Than 50 Nurses 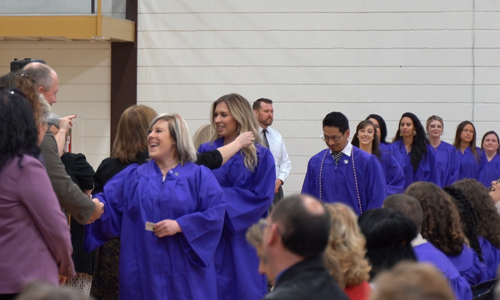 EL DORADO, Kan. – On Thursday May 28th, 53 nursing students attended a virtual ceremony marking them with the distinction of Butler Community College’s 2020 nursing graduates. In person celebration was cancelled because of COVID-19, but students were recognized for their dedication and accomplishments in a virtual, but moving ceremony.

Among the 53, 6 students graduated with a joint degree from Butler and the University of Kansas. These graduates were able to earn a KU BSN and Butler ADN degree as part of a partnership between KU Nursing and Butler. The 2020 dual degree class includes Kristen Crane of Wichita, Codie Hays of Haysville, Michael Manley of Wichita, Katelyn Miranowski of Cheney, Karina Pyle of Wichita, and Peyton Tilma of Derby.

The virtual ceremony included a welcoming address by Beth Eagleton, associate dean of nursing and allied health, as well as greetings from Butler Board of Trustees member, Jim Howell; Butler President Kim Krull; and Lori Winningham, vice president of academics.

Eagleton spoke of the student’s dedication and courage in this difficult time. The graduated showed, “courage and commitment to the profession of nursing, and it is a testimony to their strength and resilience they demonstrated in fulfilling their dream to graduate,” Eagleton remarked.

Speaking about their future in the profession, Eagleton postulated that, “This whole pandemic will, I think, positively color how they perform in the nursing profession.”

Krull, praised the graduates in her welcome and said they were the protectors of those who cannot protect themselves.

Michael Manley, the 2020 class president gave a stirring speech, speaking to the strange and difficult circumstances of graduating during the pandemic, his pride in being a Butler graduate, and his hopes for future.

Manley told his fellow graduates that this, “Speaks to the unique and unprecedented challenges, but we got by and made the best of it. Pushed on and we graduated. Past two years I was proud to wear purple scrubs because of the reputation Butler has and how well it has prepared us.”

He also thanked all of those who helped him and his fellow graduates make it through a tough but rewarding program.

“Parents and relatives thank you for the love and support, and be proud of your nursing graduates. Spouses, family, children and friends couldn’t have done it without your support. We are here today because of you,” said Manley.