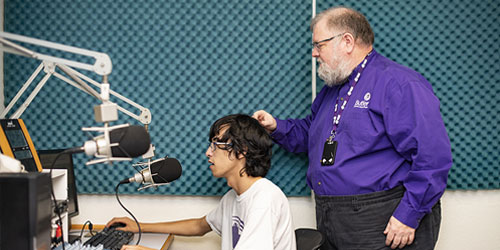 Working knowledge is the best kind to prepare you to produce in radio and television.

From broadcasts to webcasts, the technology of mass communication has grown increasingly more advanced and sophisticated in the age of the 24-hour news cycle. Whether your interest is in filmmaking or broadcasting, and however you see your role in those industries in the future, you’ll need to bring plenty of hands-on production experience with you, and that’s exactly what you’ll get at Butler.

Our courses emphasize student involvement in the production of actual radio and television programming from practically the first day of class. Our students are responsible to produce 24/7, year-round programming for both 88.1 “The Grizz” Radio and BCTV Cable Channel 20.

A diverse exposure to electronic media.

You are guided by instructors who have ongoing industry experience, so you learn real-world standards and practices. You produce feature stories, program music for radio air shifts and create comedy sketches for television. You’ll develop interviewing skills and learn to write broadcast copy. In our Convergence Media class, we’ll examine the relationship between traditional and web-based media and prepare you to step into a professional world in which the two are fully integrated.

As the world’s media outlets proliferate, the need for qualified professionals to develop reliable, ethical content will only increase. Get started on a sound footing with real-world instruction taking Butler’s Radio Television courses.

Your courses in Radio Television can lead to a career in:

**This includes two years of tuition based on being a Kansas Resident and taking 60 credit hours, estimated fees, and estimated books. Housing and meal plans not included. Fees may vary depending on specific degree path.

Save time and money when creating your schedule. View your course sequence and determine how long your degree will take to finish.

CAREERS IN THIS FIELD

The graph below illustrates local salaries based on a career path related to this degree. Each career path varies as does the necessary training required.* For further information, connect with your program’s lead instructor.

546 Radio and Television Announcers are currently employed in Kansas.

*Salaries will vary based on degree level obtained and years of experience. The accuracy of EMSI data is deemed reliable but not guaranteed by Butler Community College and is subject to change.