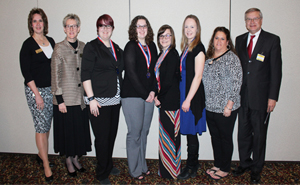 Four Butler Community College Students honored by Phi Theta Kappa and the Kansas Board of Regents.

Four Butler Community College students were named to the 2017 Kansas All-State Academic Team. The students were among 55 Kansas community college students honored on Feb. 16 in Topeka as part of the 22 annual Kansas All-State Academic Team Luncheon. The event was attended by community college, university and Kansas Board of Regents representatives, as well as Kansas legislators. The event, co-sponsored by the Phi Theta Kappa International Honor Society and the Kansas Association of Community College Trustees, annually recognizes top students from the state’s community colleges.

Butler’s President Kimberly Krull is also the President of the Council of Presidents for the Community Colleges of Kansas. Krull noted that the state of Kansas is number one in the nation for the number of students who start at a community college, transfer to a four-year university and then complete a bachelor’s degree.

“That is a tribute to the powerful partnerships we have between our community colleges and universities, both private and public,” Krull said. The President encouraged the honorees to go back to their communities, to continue to volunteer and to share their education. “When you change lives, you magnify your education.”

In addition to the luncheon, the honored scholars toured the Capitol, met legislators and heard keynote speaker the Rev. Jamie Washington. Washington is an engagement specialist who serves as the president and founder of the Washington Consulting Group, a multicultural organization development firm located in Baltimore.

Those honored were presented an educational scholarship of $300, an academic medallion and a certificate signed by Kansas Governor Sam Brownback. In addition, a minimum $1,000 scholarship will be provided to All-Kansas Team recipients who transfer to Kansas Board of Regents universities, Washburn University or a Kansas Independent College.

Each scholar is now nominated for the 2017 All-USA Community College Academic Team, sponsored by USA Today, Phi Theta Kappa and the Follett Higher Education Group. First-team members will receive a $2,500 stipend and will be featured along with second- and third-team members in USA Today. Team members are also presented with medallions. Names of the students will be placed on the society's website, www.ptk.org.

Phi Theta Kappa is the honor society for students attending two-year community colleges. Membership is based on high grade point averages and other criteria, with members focusing on scholastic achievement and service to community and campus. This year’s 55 scholars are part of a statewide student body that are enrolled at the 19 Kansas community colleges. Each scholar was selected by his or her own community college for the annual statewide academic team.

Kaylyn Baker of El Dorado is majoring in nursing. She is a student at Butler’s Early College Health Sciences Academy in Rose Hill and is scheduled to graduate from Butler this May, prior to receiving her high school diploma from Bluestem High School. Kaylyn is a high school senior serving as president of her class. At her high school, she is a member of National Honor Society, the volleyball team, the Scholar’s Bowl team and is the manager of the wrestling team. After graduating, Kaylan plans to seek a bachelor’s degree in nursing from Wichita State University.

Alyssa Dehncke of Derby is majoring in liberal arts. She graduated from Derby High School. Alyssa is the Chapter President of Phi Theta Kappa at Butler and Regional Vice President of Western Kansas. Alyssa is also active in her church and Girl Scouts. She plans to attend Wichita State University and double major in English and psychology. After that, Alyssa hopes to obtain her doctorate and teach in higher education.

Amanda Hinnen of Towanda is majoring in liberal arts and plans to continue at Kansas State University. She hopes to major in Spanish and minor in business. After college, Amanda would like to become an interior designer. At Butler, Amanda performs with the Concert Choir and is active with her church.

Madalyn May of El Dorado is majoring in farm and ranch management. She is the president of the Catholic Grizzlies, vice president of the Collegiate Farm Bureau and a member of Young Farmers and Ranchers. This former homeschooler hopes to go into the pre-vet program at Kansas State University and eventually go to veterinarian school. Ultimately, she wants to set up her own practice and ranch on the side, raising show goats and commercial beef cattle. She would also like to teach an agriculture class at Butler.